The forecast looked excellent. Light winds, good weather and settled conditions for a number of days. There seemed little reason not to head away for a few days kayaking. I hastily contacted my sea kayaking friend and colleague Ben who lives on the Isle of Barra to see if he was keen to join me on a trip. What started out as an intention to sedately explore the coastline of the Isle of Lismore soon became the ambitious plan that was highlighted in my previous blog post.

Ben arrived on the afternoon ferry from Barra with his kayak in tow and after a hasty grocery shop, we packed on the beach in front of the promenade and set off. Our first night destination was the lighthouse at the southern tip of Lismore, a place that we both had wanted to camp. The lighthouse is a handsomely conspicuous landmark for the countless ferry passengers heading to and from the Hebrides to admire and photograph.We arrived as dusk was falling and in a matter of minutes we set up camp. 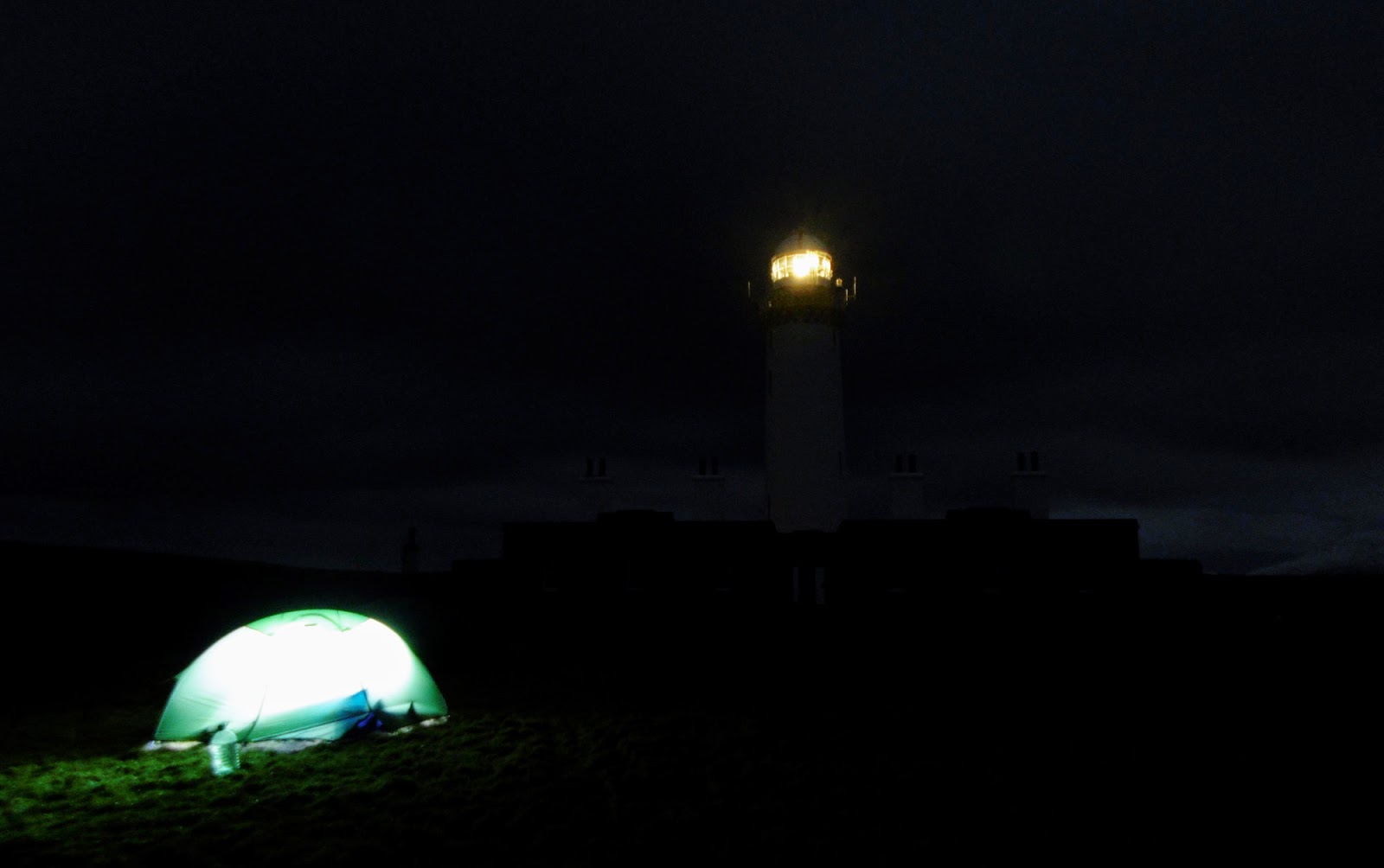 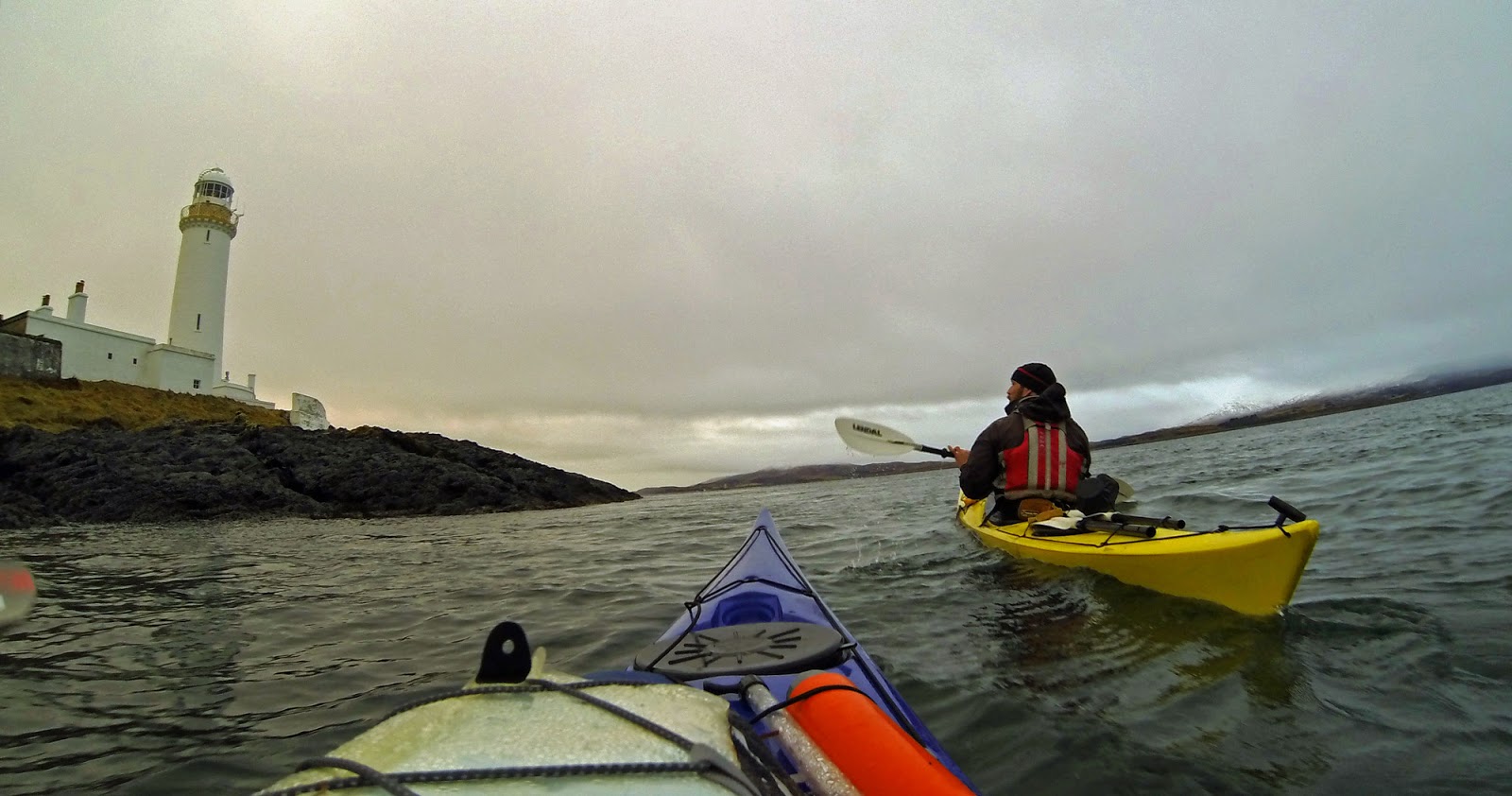 The next morning the day dawned still and fair. We were away early on a strong ebb tide heading south down the Firth of Lorne and along the rugged coastline of the Isle of Mull. Apart from the CalMac ferries we had the seas to ourselves. Pushed along by the spring ebb tide we made good progress. We allowed ourselves the pleasure of playing amongst the crevices of the shoreline rocks where the lazy swell surged in and out. This seven mile stretch of coastline is predominantly uninhabited except for the Eagles, Red Deer and the plethora of other wildlife that live on Mull. We paddled past two impassively huge White Tailed Eagles who watched us with from their lofty perches on the rocks above us only deciding it seems, to lazily flap away with heavy wing beats on their huge wings just to show us how mighty they were. We were joined a little while later by a mighty Golden Eagle who delighted us by soaring low across our heads before effortlessly finding an invisible updraught that swiftly lifted it up onto the crags high above us. A fine twelve point stag snorted and rounded up his harem as we silently paddled past. A couple of common seals followed us, keeping at a safe distance, disappearing with a violent splash any time that we glanced at them over our shoulders. 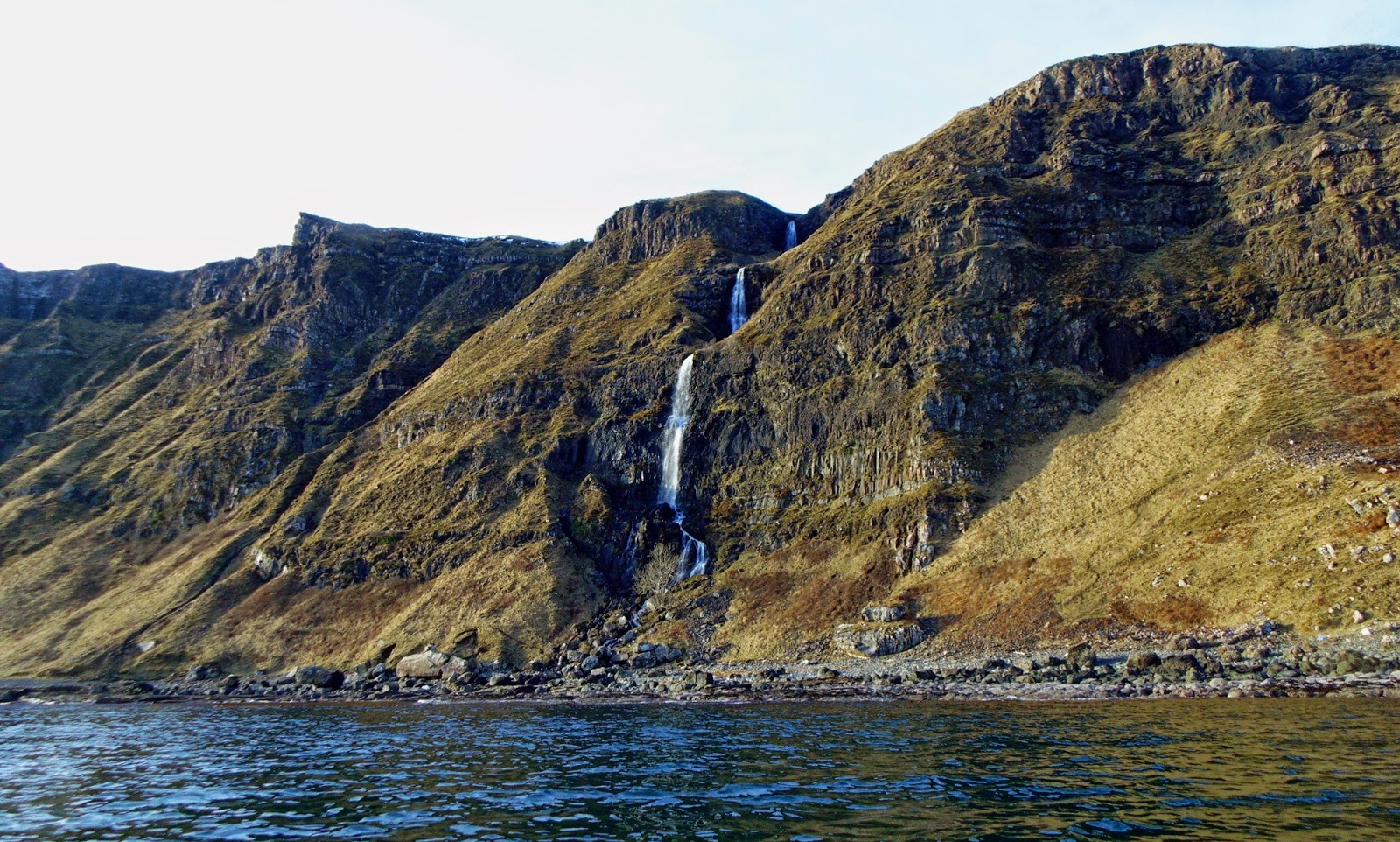 We took lunch on the western side of Loch Buie before continuing on our way to Carsaig and then further under the immensely impressive cliffs the uniquely shaped Carsig Arches where we pulled ashore for our second night camp. This has to be one of the finest camping locations that I have ever had the pleasure to spend the night. The cliffs loomed over us, providing a sense of safe security and privacy from the hectic world we felt we had left behind. Across an expanse of rippled Hebridean sea the low lying island of Colonsay seemed temptingly close. While we cooked our dinner beside a camp fire on the rocky beach, we were treated to a glorious sunset. The magnificent full moon lifted over the larger of the arches into a clear and star studded sky. As we supped our drams by the crackling fire and chatted late into the night, we couldn't avoid appreciating the stunning beauty and the sense of deep peace at this particular moment of our lives. 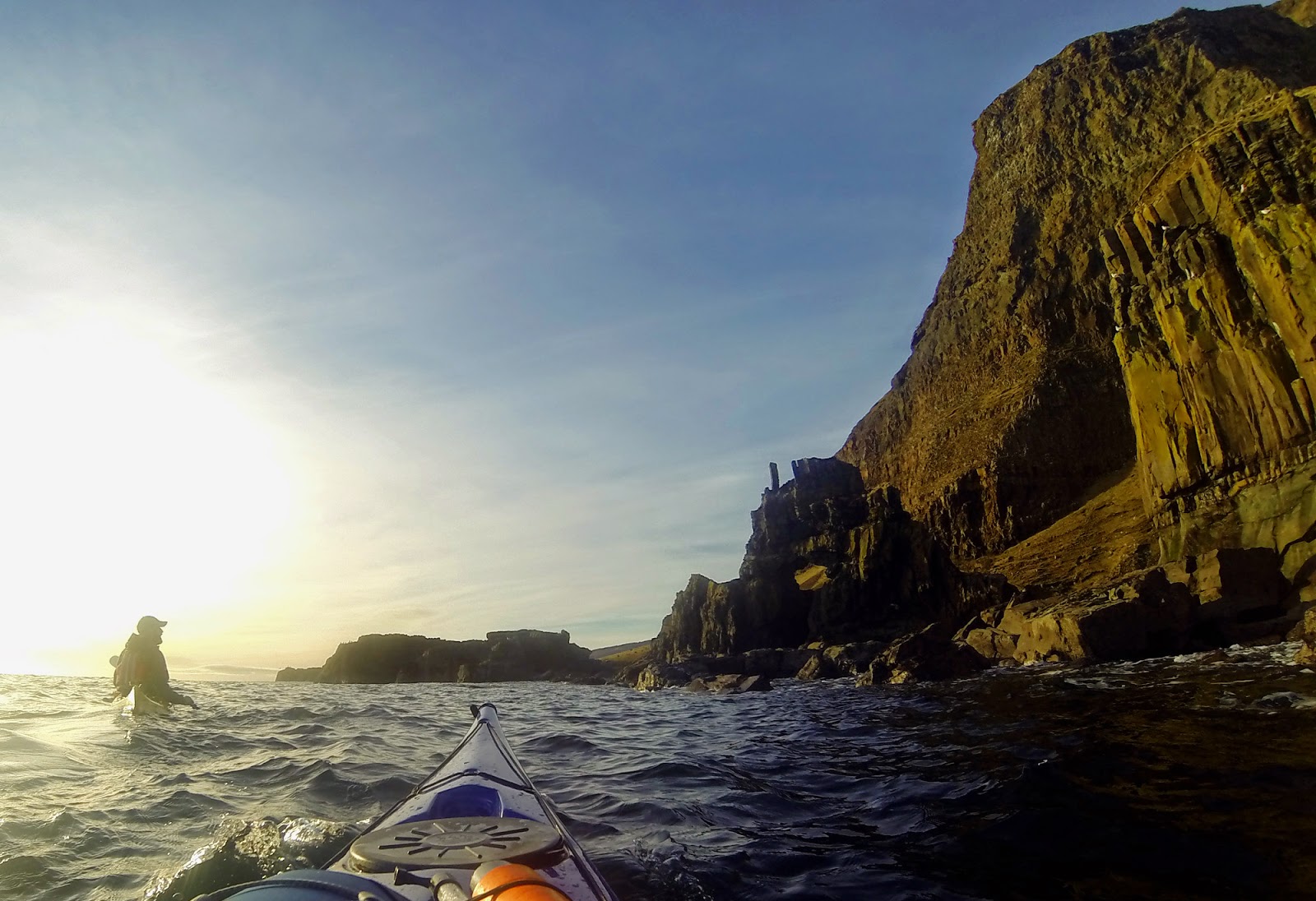 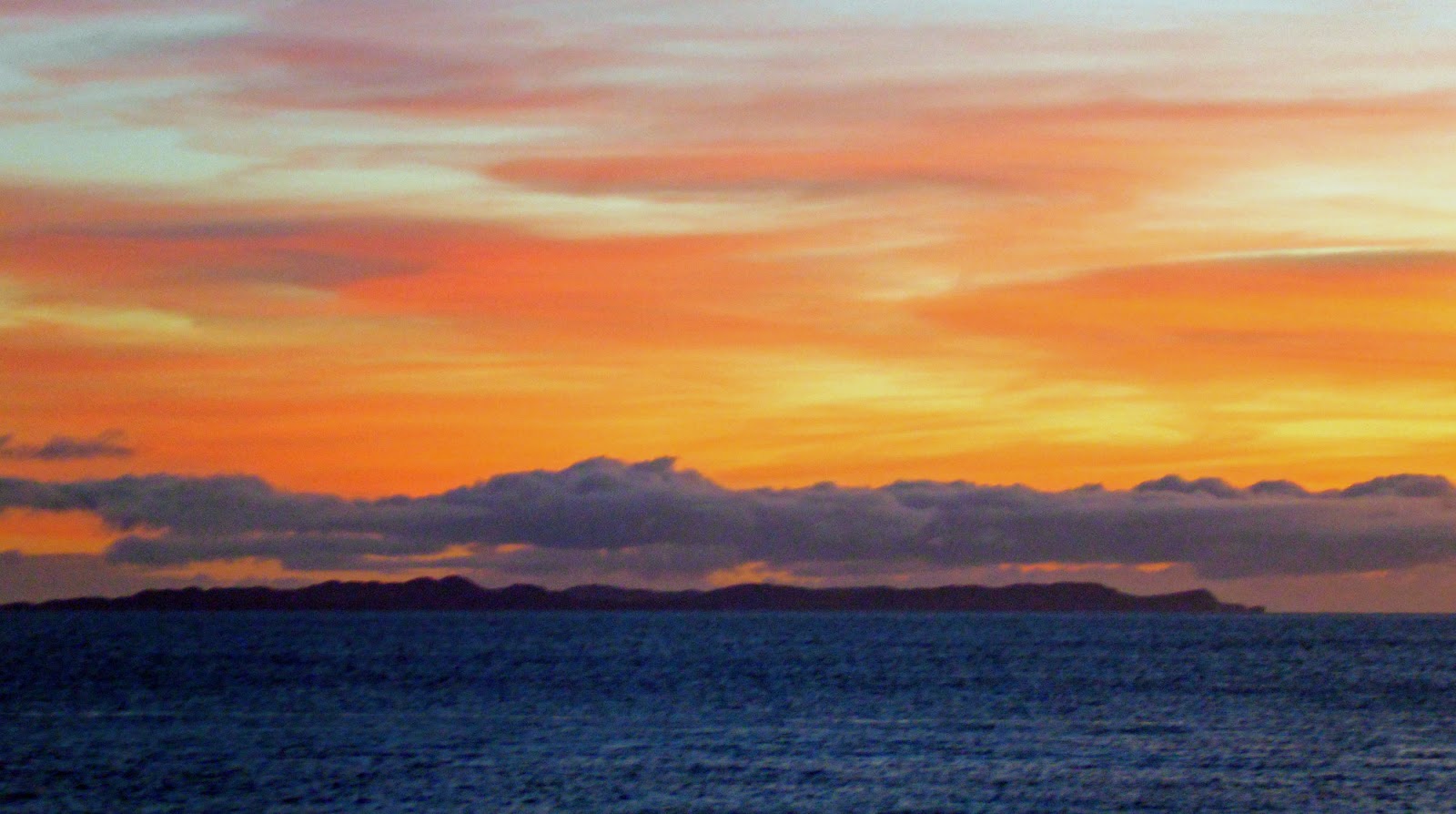 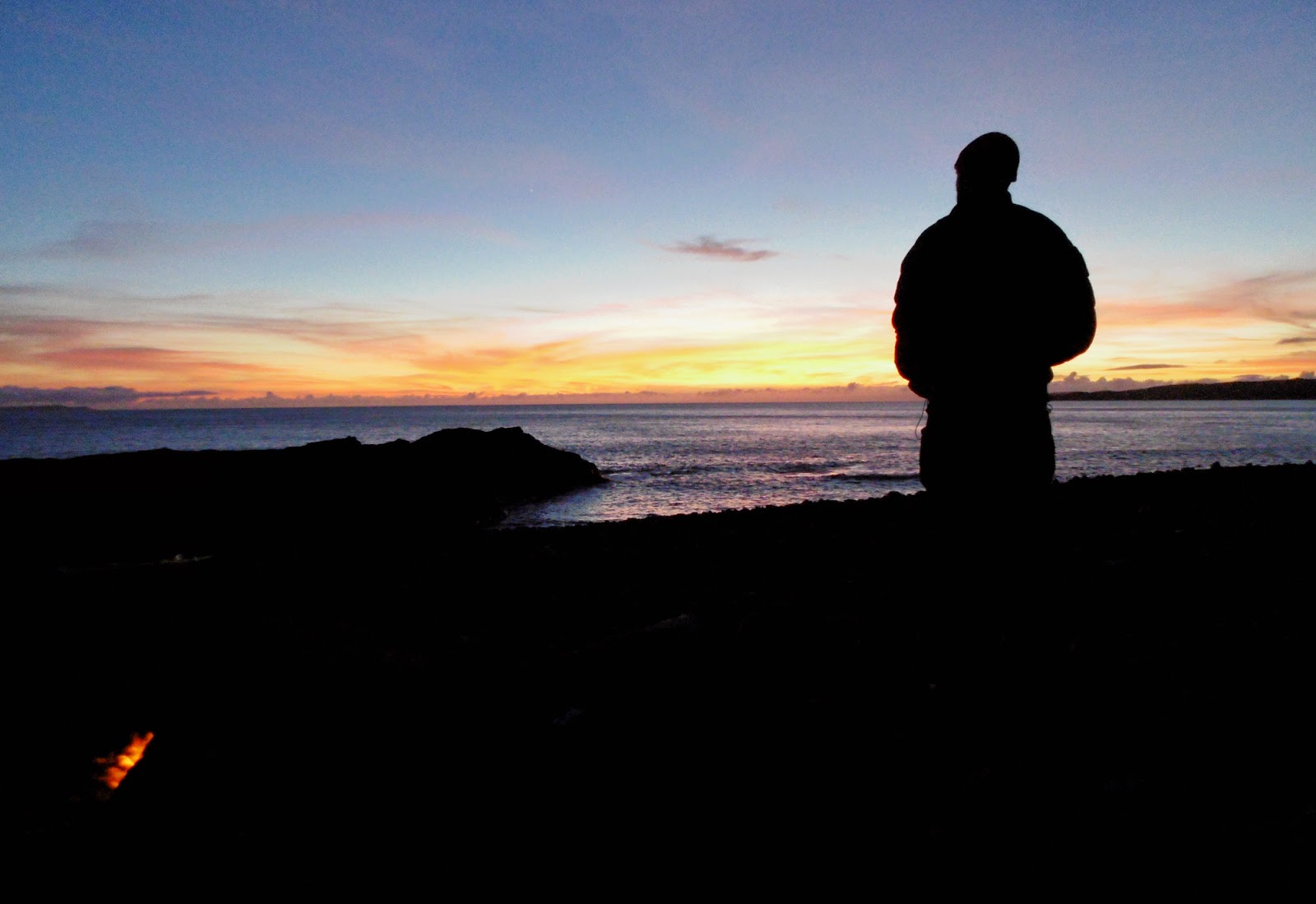 In the early hours of dawn we wandered over to the magnificent arches to watch the sun rise. These prehistoric rock formations present an air of a landscape more fitting of Utah than the southern coastline of Mull. The wild goats begrudgingly moved aside to allow us to wander under the main arch to watch the sun rise over the low lying hills on Jura. Not wanting to linger we were soon on our way again exploring the indented coastline of the Ross of Mull where every wee headland we rounded presented us with a golden beach or secret cove. It was not long before we were rounding the island of Erraid where the fictional character of John Balfour from the book Kidnapped by Robert Louis Stevenson was shipwrecked. A steady tide pushed us up through the Sound of Iona to the northern end of this iconic Hebridean island. We made camp just above the shoreline glad of the opportunity to get warm after what had been a cold days paddling. 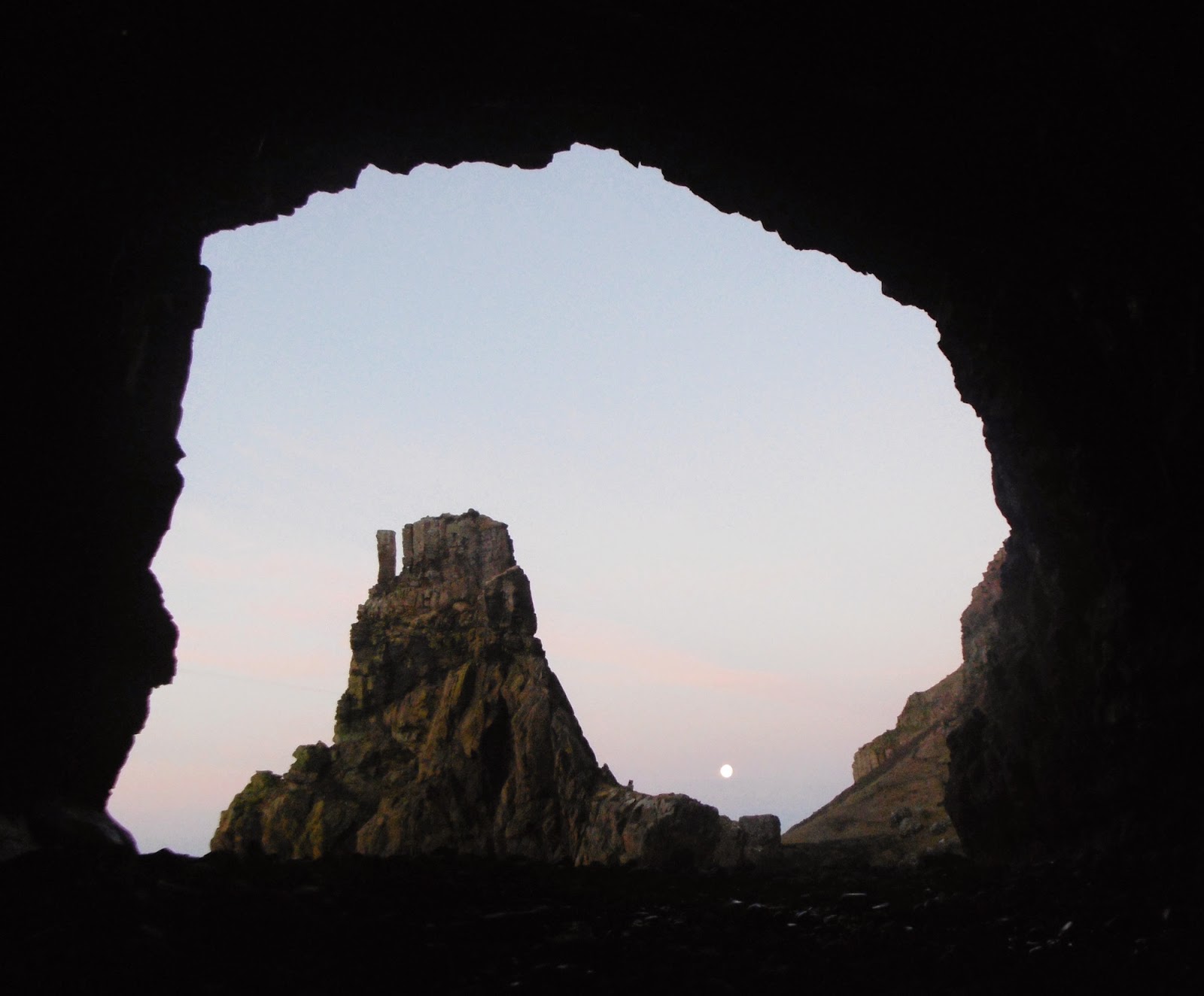 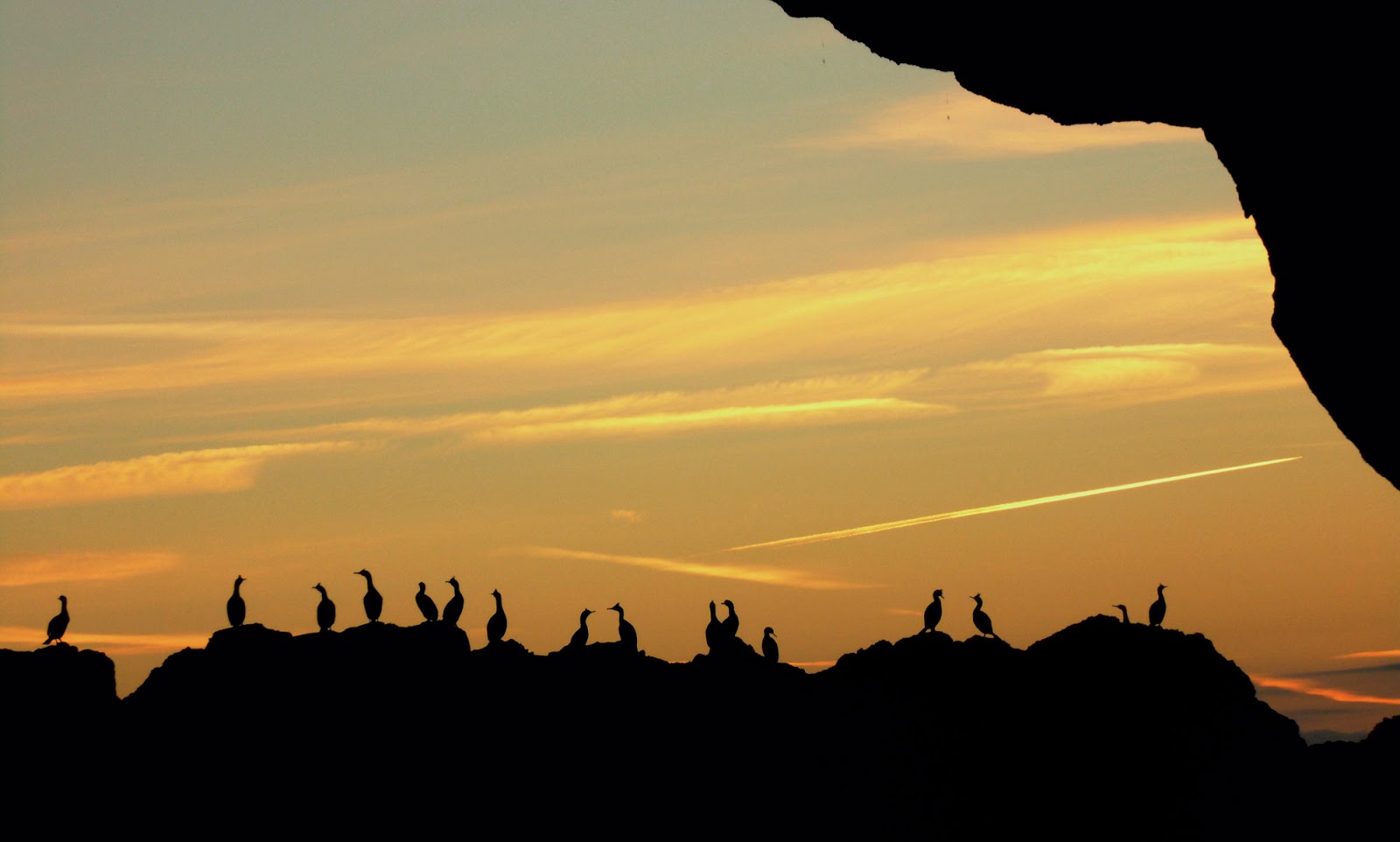 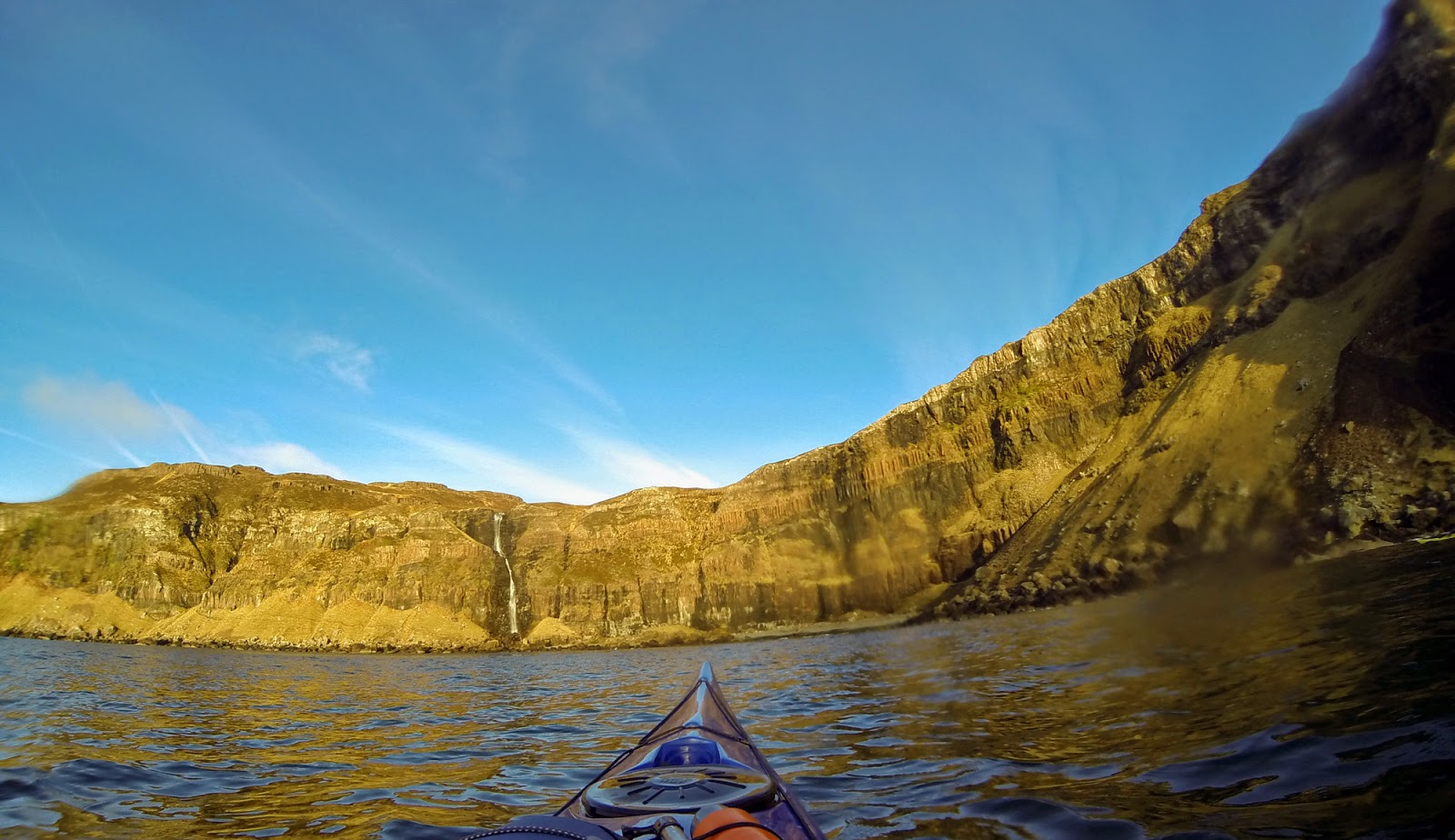 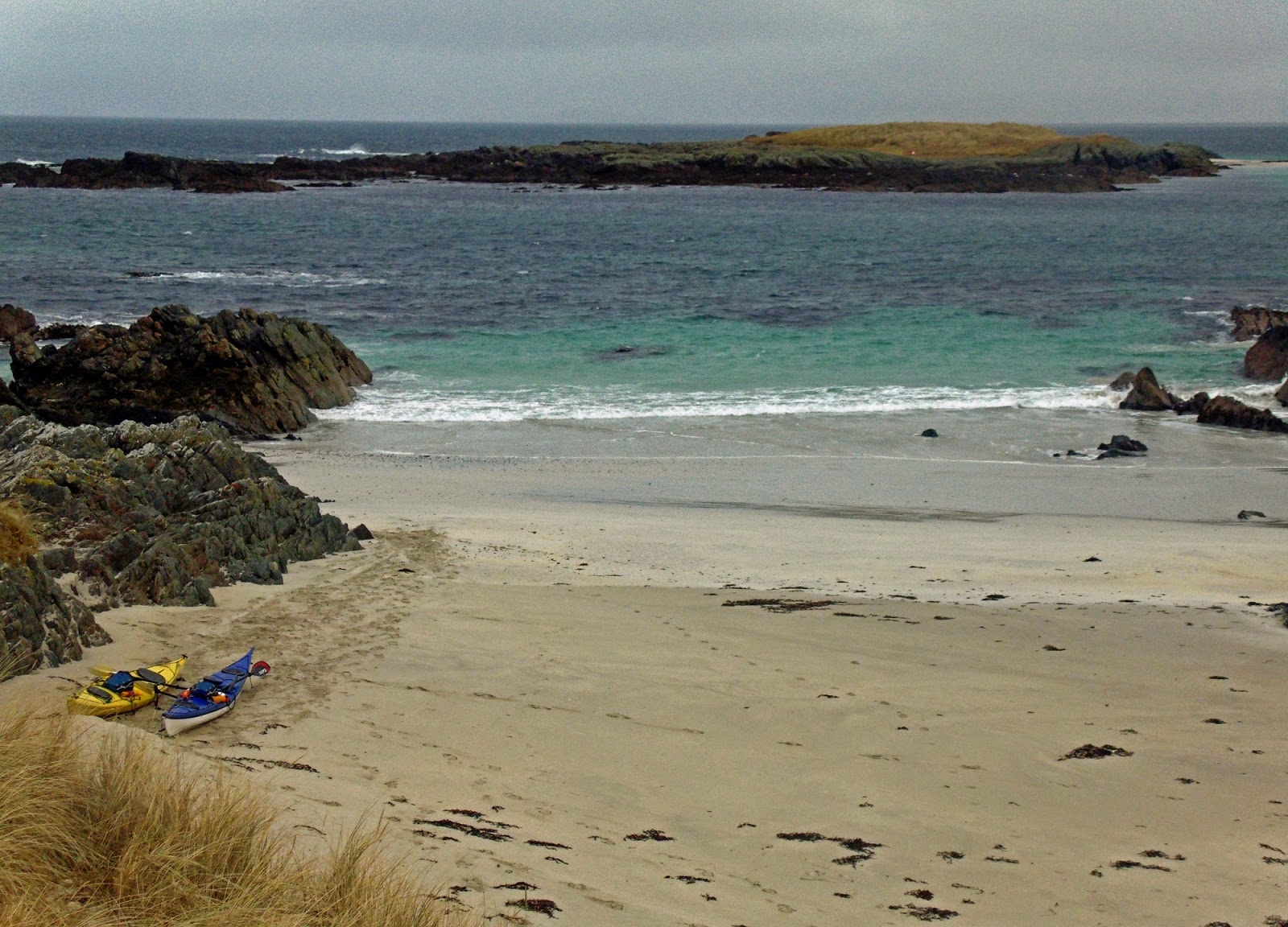 The next morning we chose to wander around the village and visit the early Christian monuments that Iona is famous for. St Columba established a monastery here in 563AD which soon became a prominent centre for the Christian Faith in Scotland and is where many early Scottish Kings are buried. Indeed there did seem to be a reverent air to the place as we wandered around - a true sense of of peace and tranquillity. 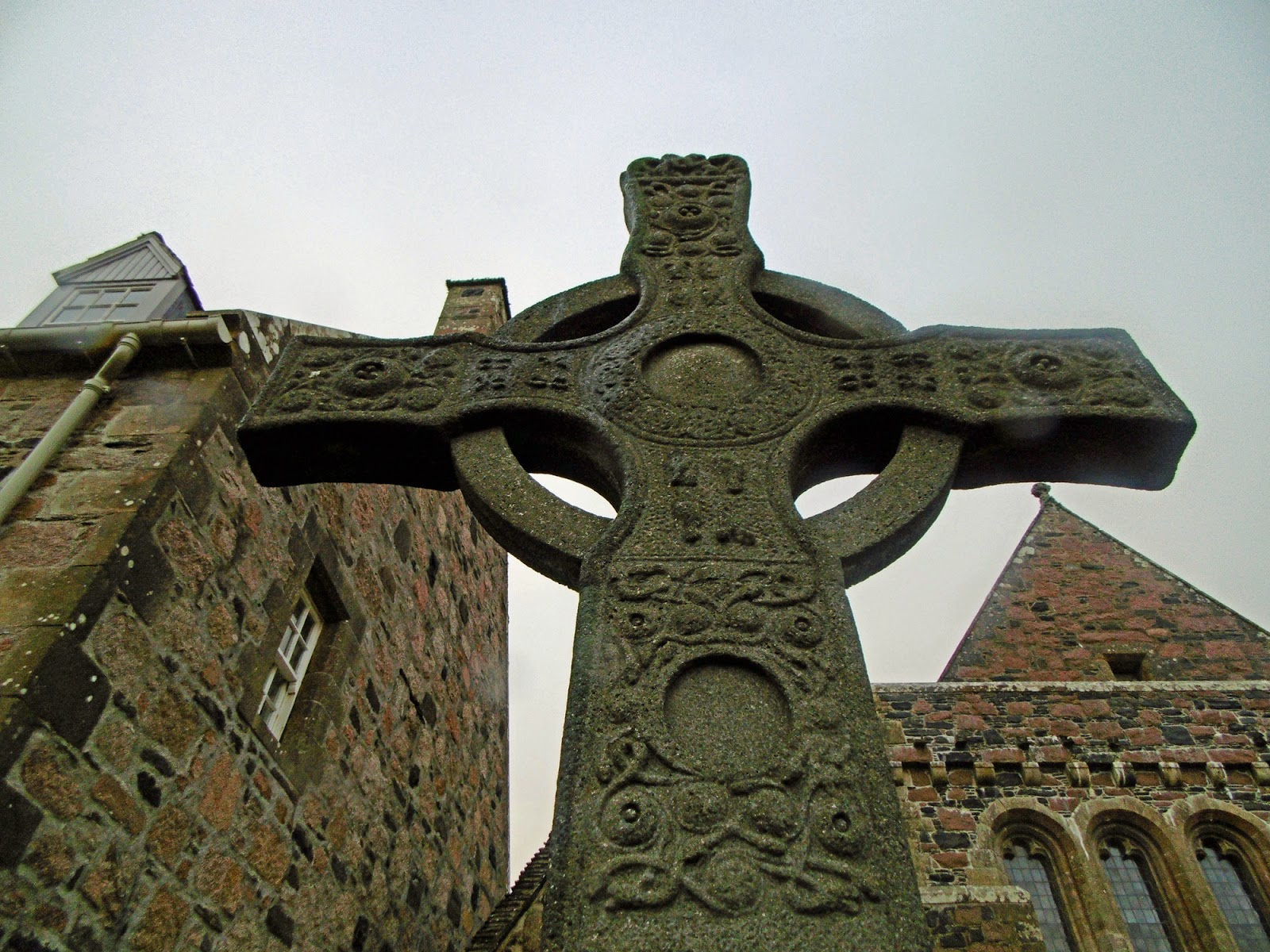 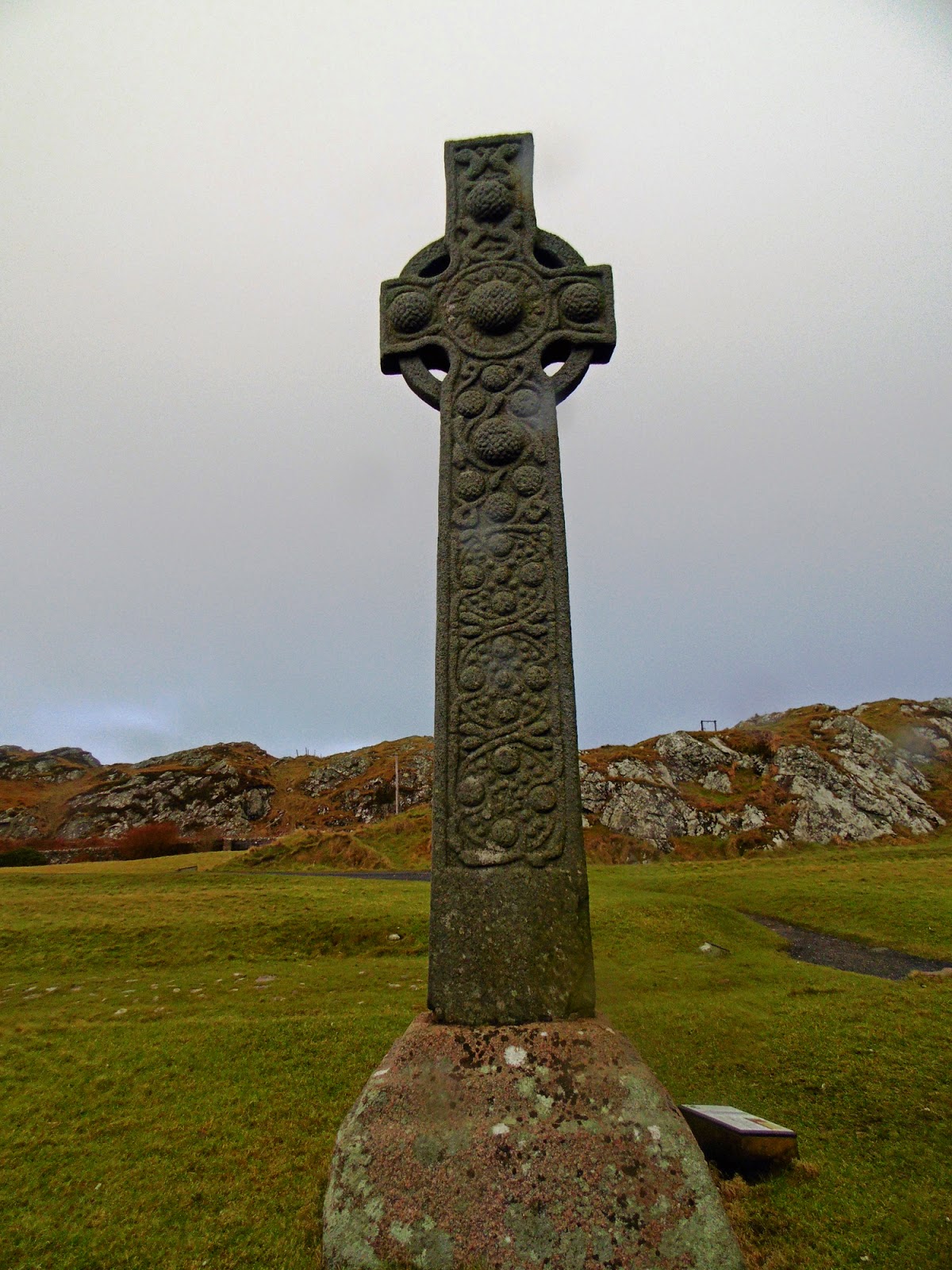 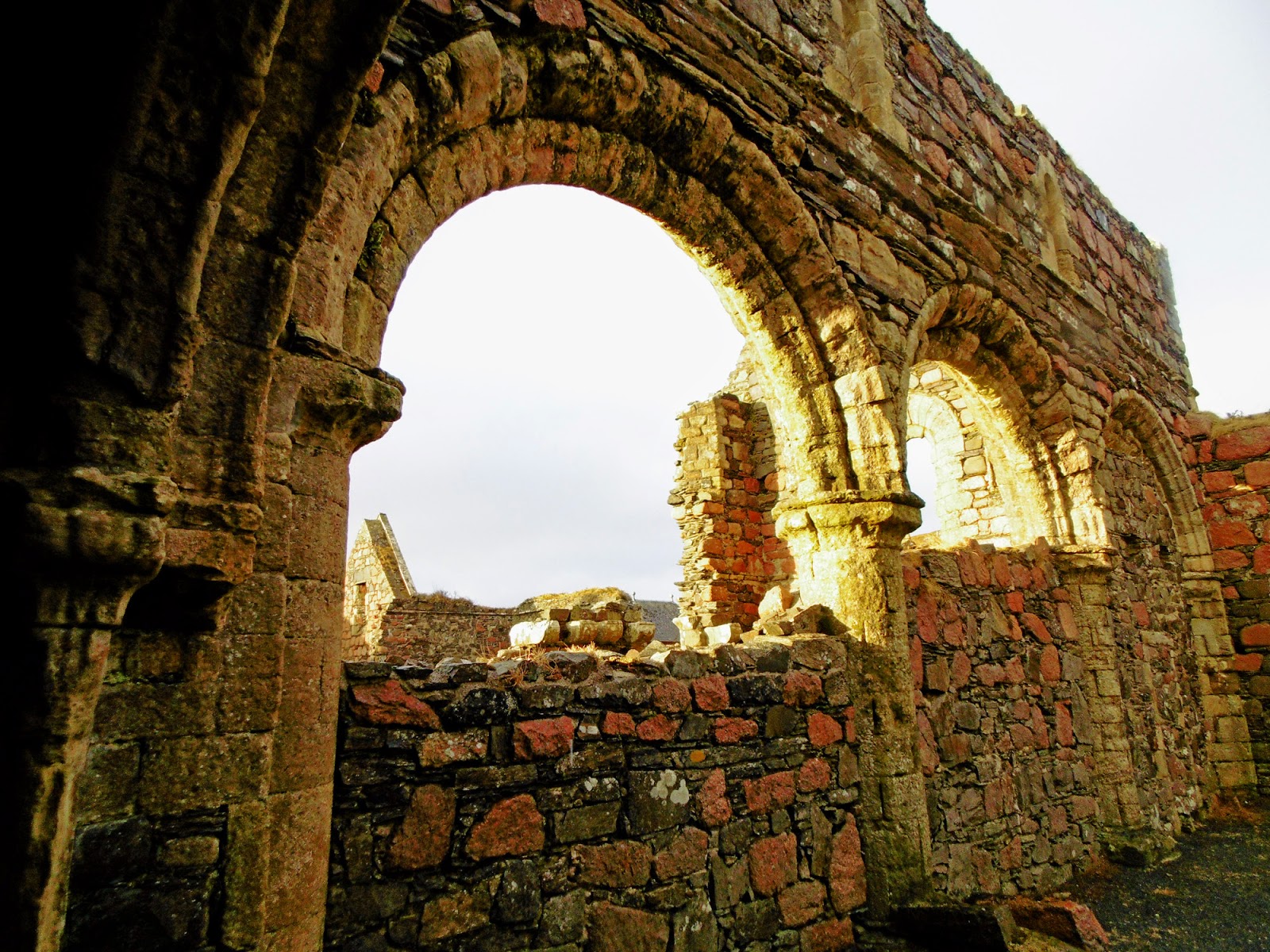 In the afternoon we packed and were on our way over to the island of Staffa, a short crossing of six miles. The sea was lumpy and the wind threatened to rise to send us scuttering back to Iona. However, by the time we arrived at the island the conditions were just about perfect. Staffa is owned and managed by the National Trust for Scotland and is where visitors flock in their thousands to look at the renowned Fingal's Cave. The island is famous for the incredible basalt columns that give it the appearance of having been carefully constructed by humans of a bygone age. Fingal's cave is a mighty hollow that seems to cut into the heart of the island and is a sea kayaker's dream to paddle into. I had last paddled here in 1995 and being here again was a tremendous experience for me. There is a definite thrill to paddling into caves - the boom of the sea on the cliffs is amplified, the rise and fall of the swell is accentuated and the colour of the water is heightened by the refracted light. We were wary of the lazy but not insignificant swell that washed in and out of the cave while we were there. A couple of times we beat a retreat when a particularly big set threatened to wash us up into the dark confines of the back of the cave where it was easy for us to imagine where Fingal, the giant, was lurking! 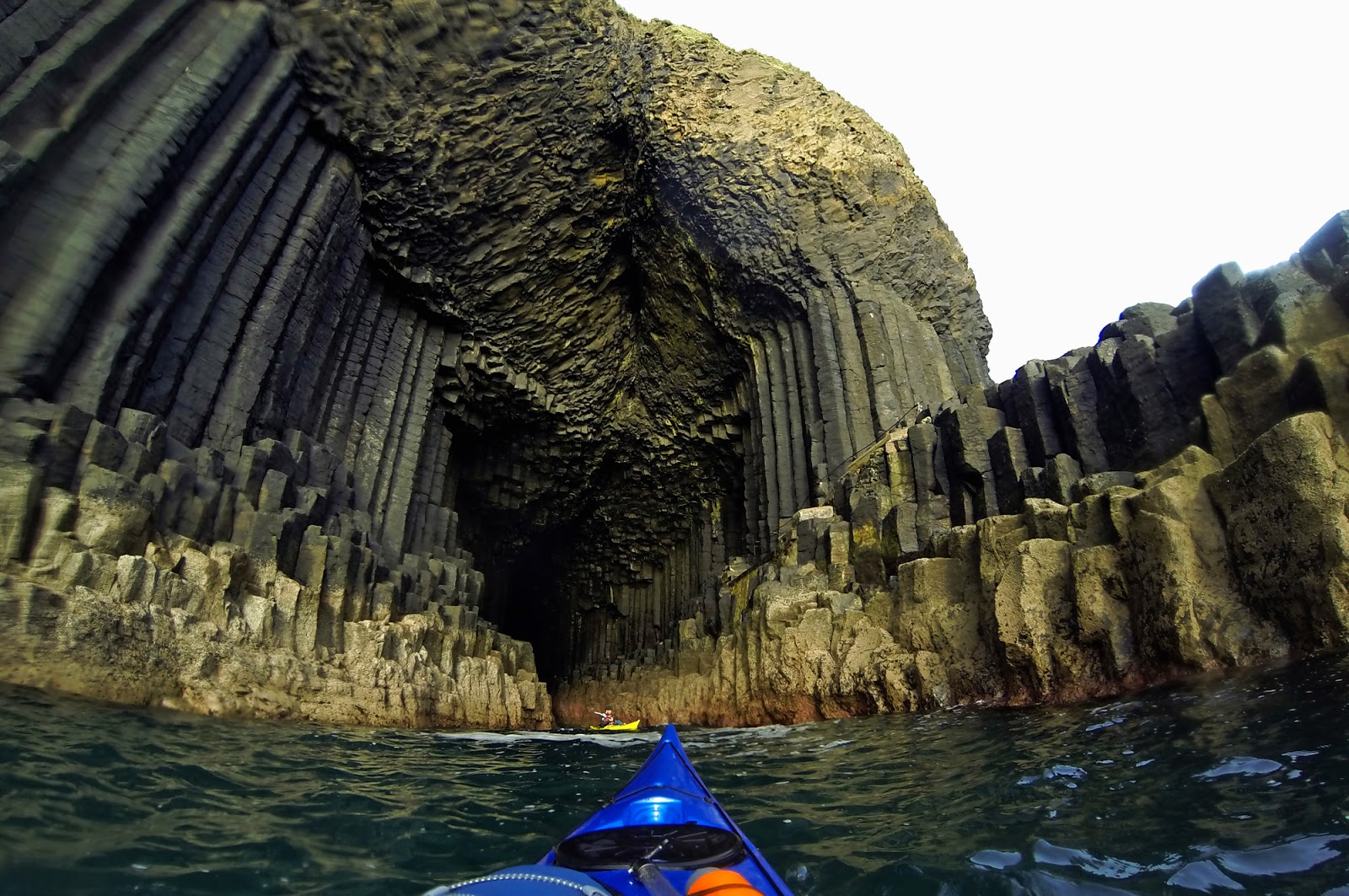 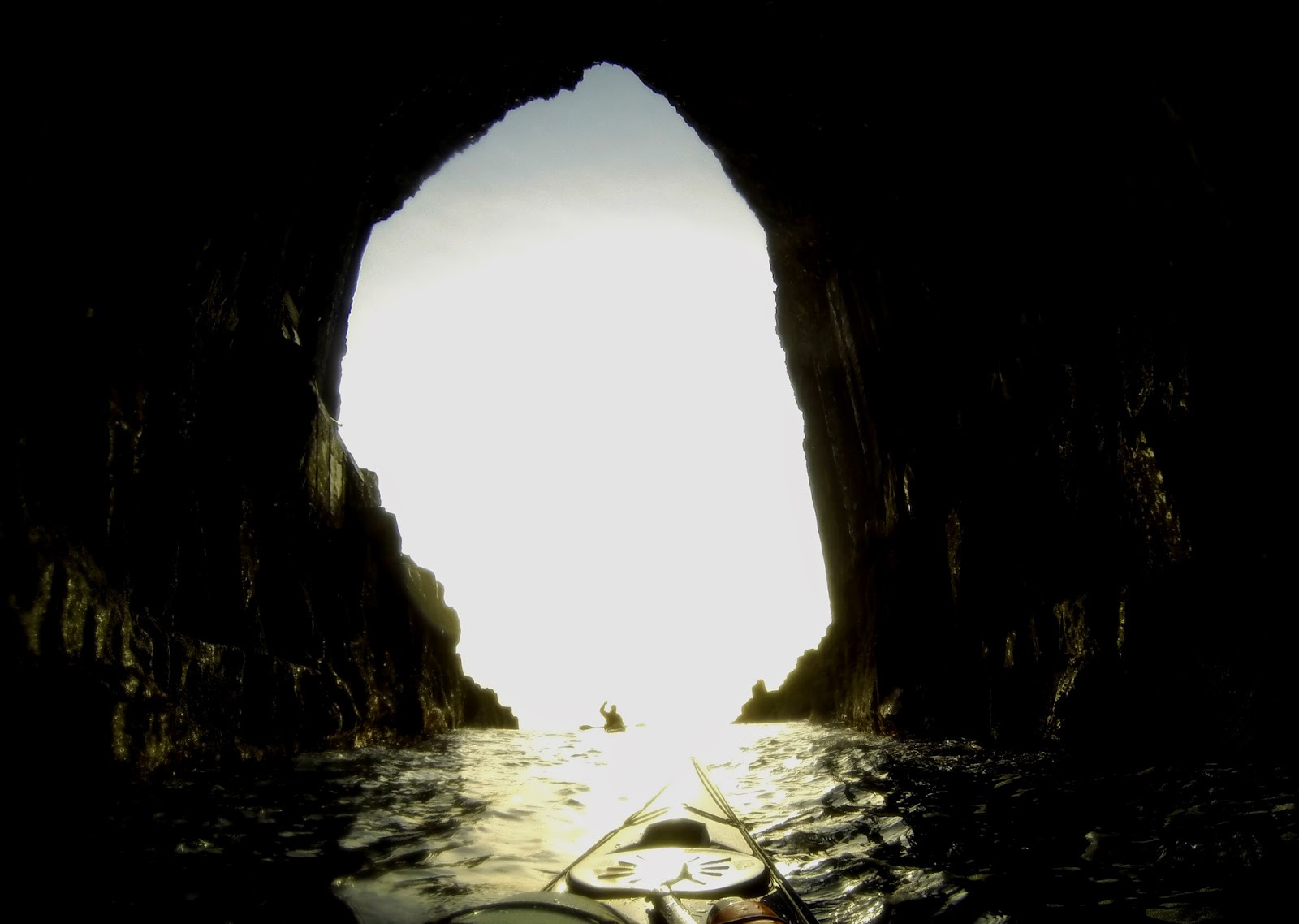 When we felt we had enjoyed as much as we could we paddled around to find a suitable landing spot and chose a magnificent site for our nights camping. That night we were treated to one of the finest Hebridean sunsets that I have ever had the privilege to experience. We sat on the high point of the island, wrapped up from the chill winter air to watch the golden orb disappear beyond the horizon and then the sky light up in myriad hues of warm yellows, golds, reds and pinks. Thus calmed by the tranquil setting we enjoyed an early night. The next morning we were presented with a dramatic dawn as the clouds swept in from the west, almost it seemed, in haste to conceal the peak of Ben More on the Mull mainland from our view. 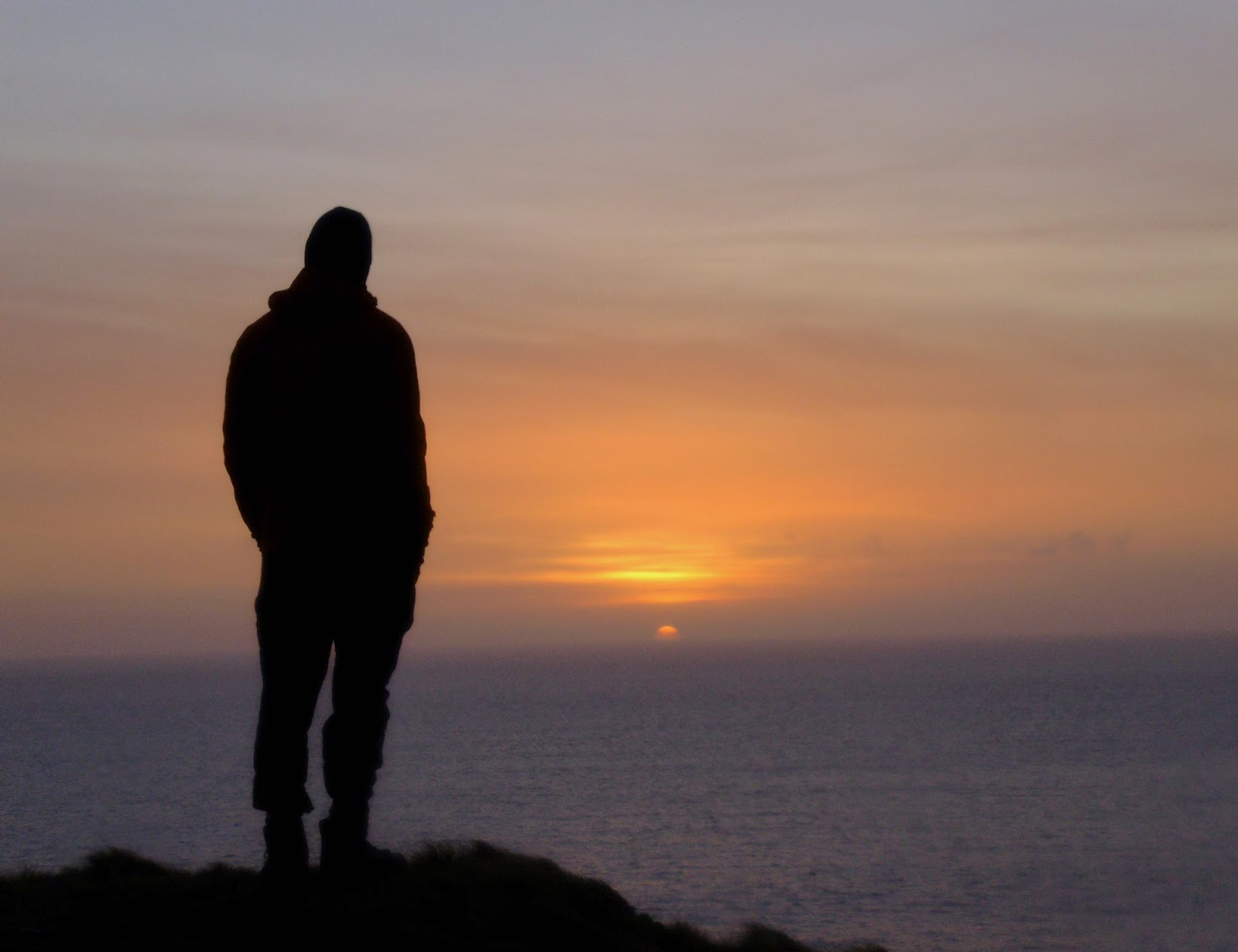 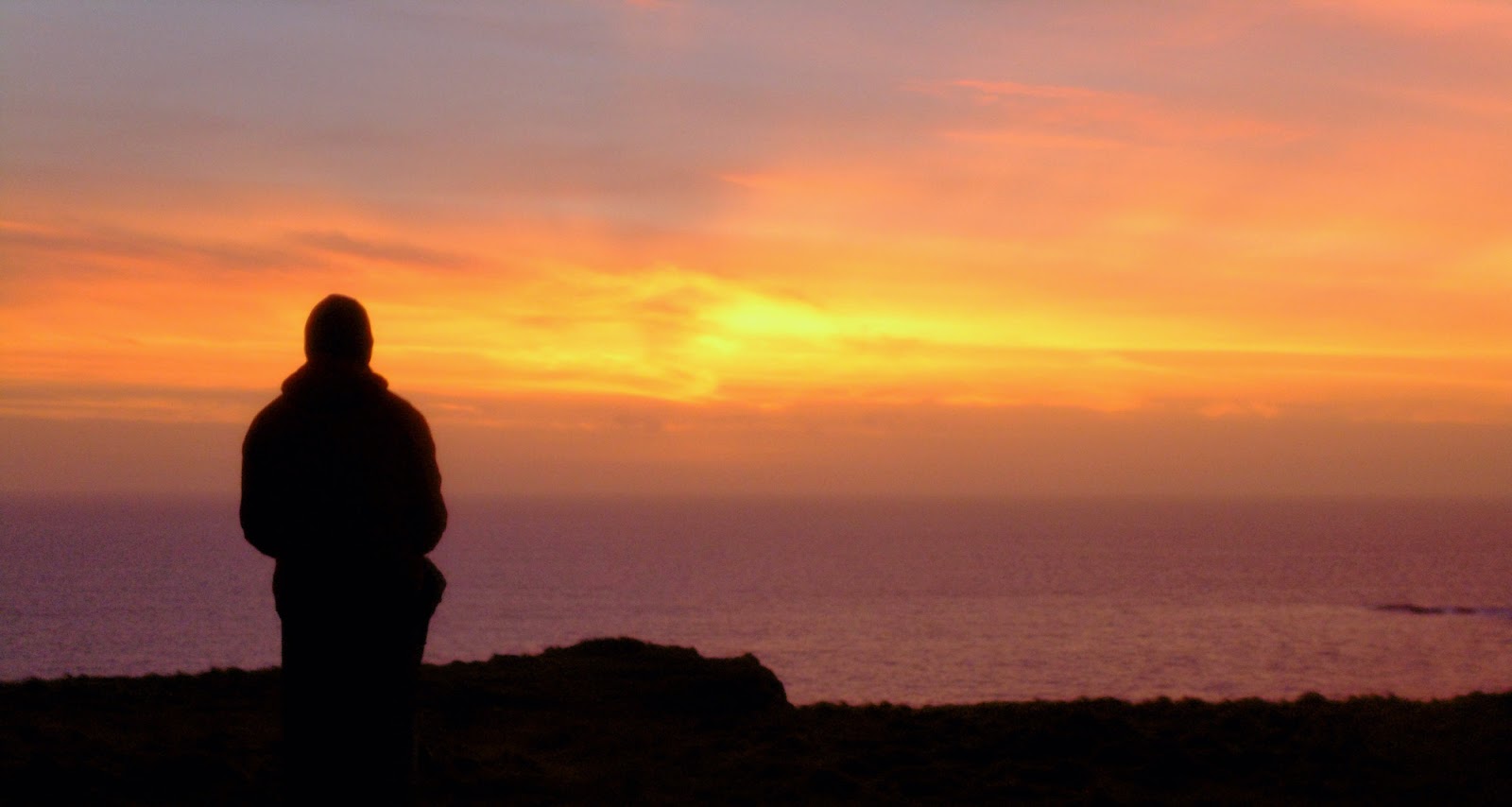 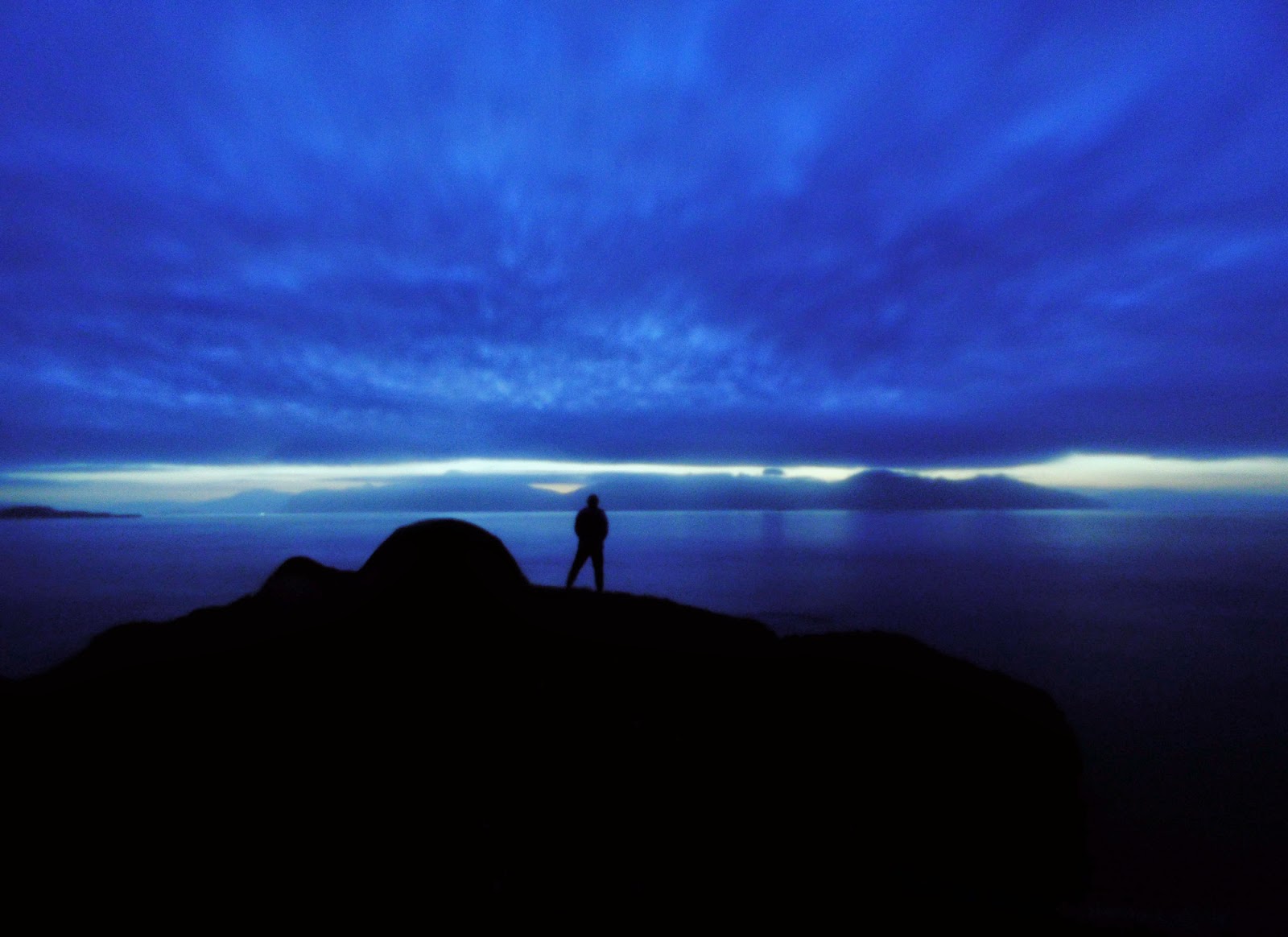 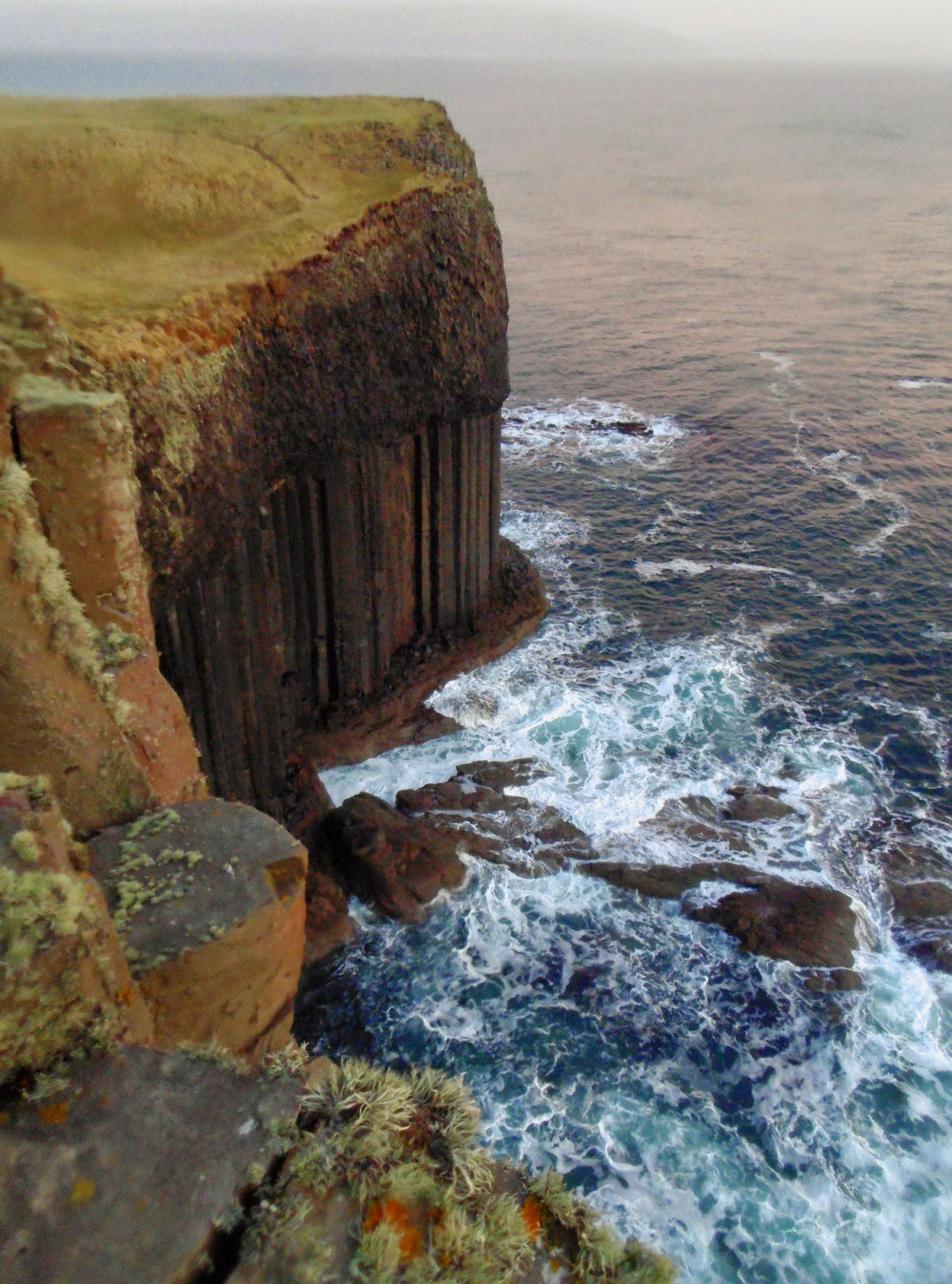 This was to be our last full day of paddling and we decided to head across to the Isle of Coll via the Treshnish Isles, a total crossing of seventeen miles. The clouds that had swept in during the morning had now lowered to sea level considerably reducing the visibility, so much so that we had to use a compass bearing to reach the Treshnish island of Lunga. As we crossed the Fulmars swept by us, casually checking us out, their wing tips almost cutting the surface of the sea. As we arrived we disturbed a mighty Sea Eagle that was feasting on a freshly caught sea gull. Picking our way through the skerries and islets of the Treshnish was a delightful experience. The Grey Seals were singing to each other and when happened a little too close to their perches on their favourite rocks, they slipped into the water with a snort and a splash, surfacing not far behind us to give us an inquisitively disdainful stare.

We enjoyed a quick lunch on Fladda before heading across the final nine mile stretch to the Isle of Coll. The conditions were misty and we had to use a compass bearing for most of the crossing. However we were treated to some incredible fog-bows, the watery almost spectral halos of light cause by the sun shining onto the fog. We arrived on Coll in good time and set up camp next to the road close to the ferry port. Our trip at an end, the last thing we had to do was celebrate with a couple of pints in the Isle of Coll hotel. 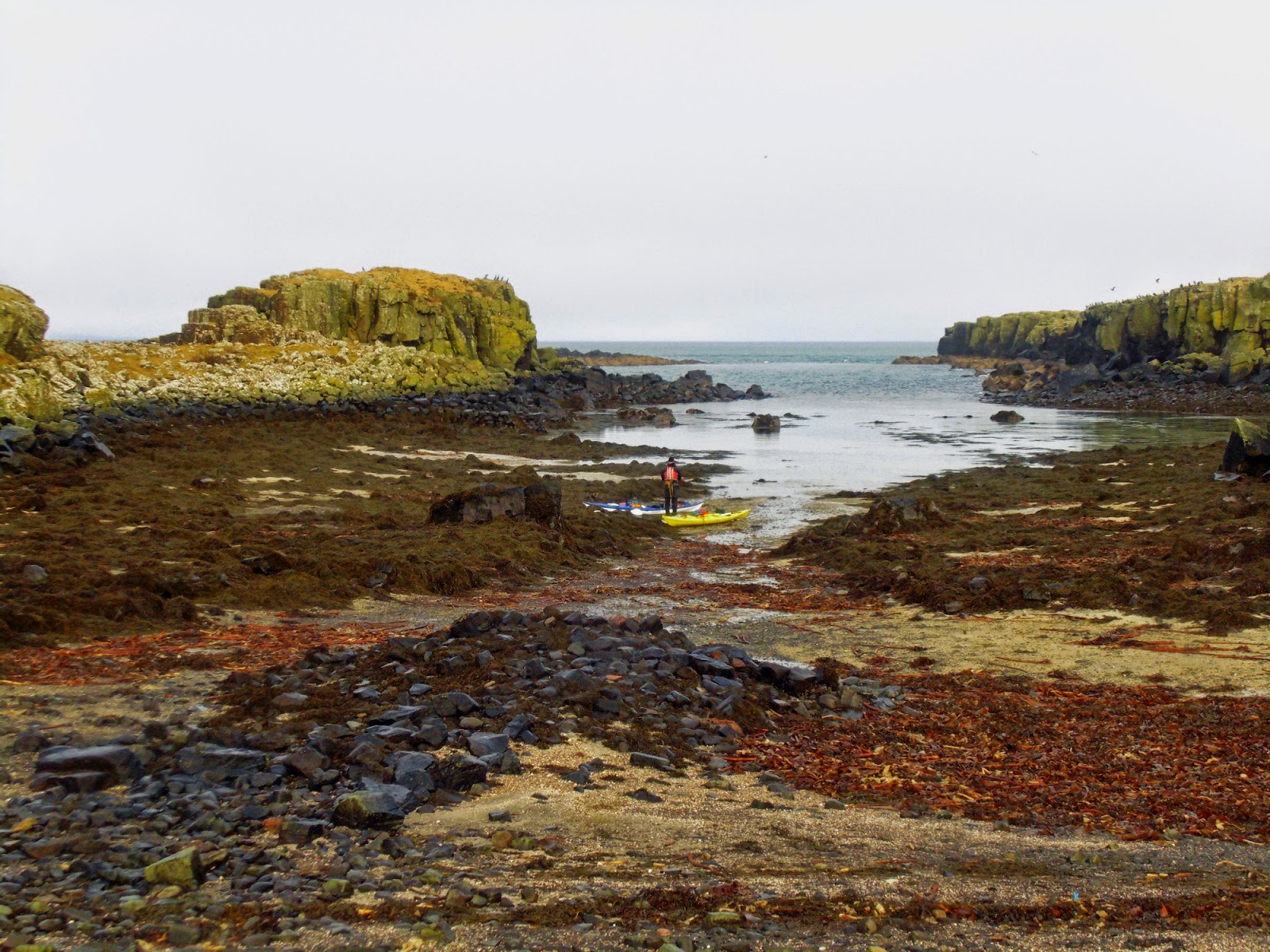 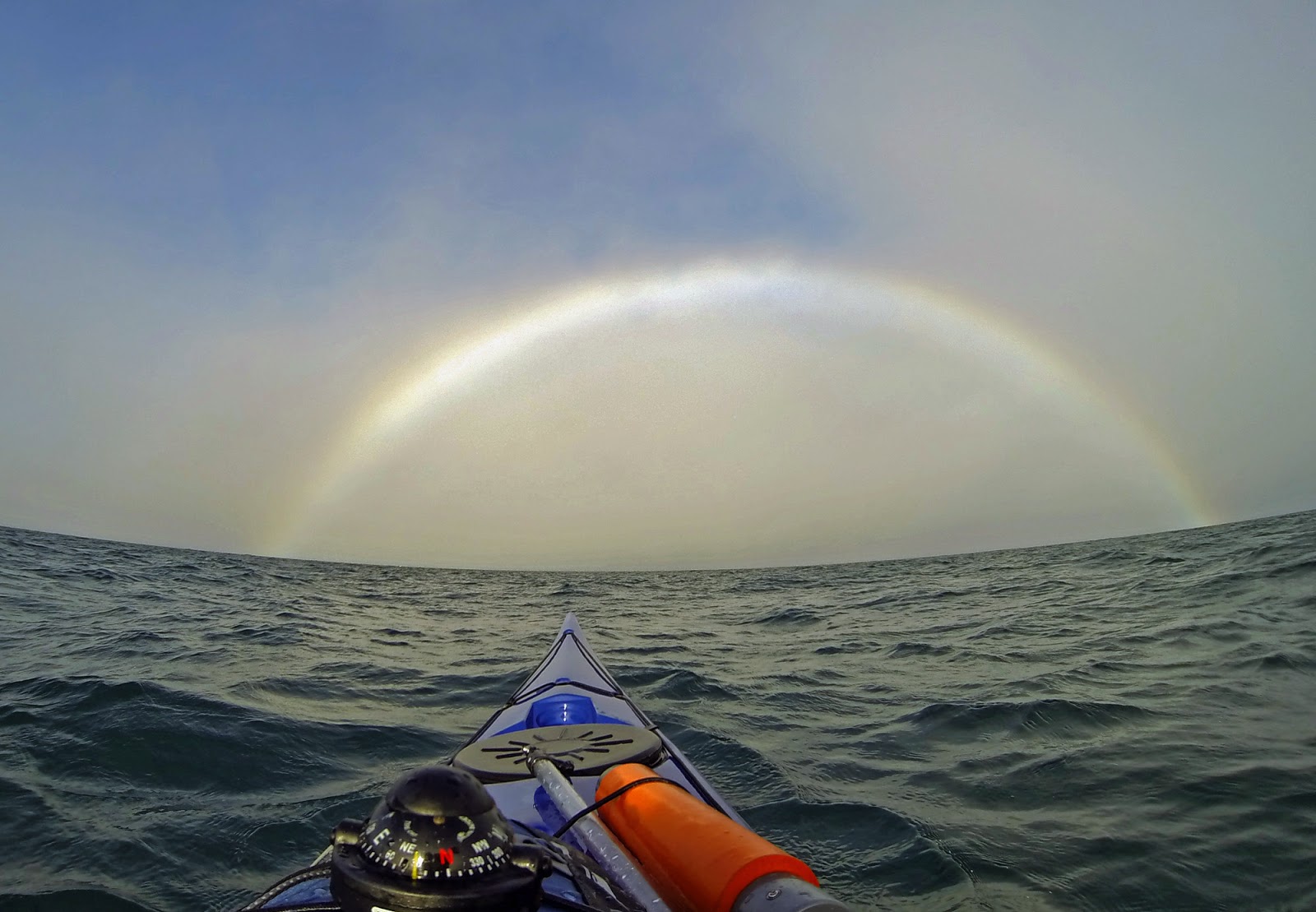 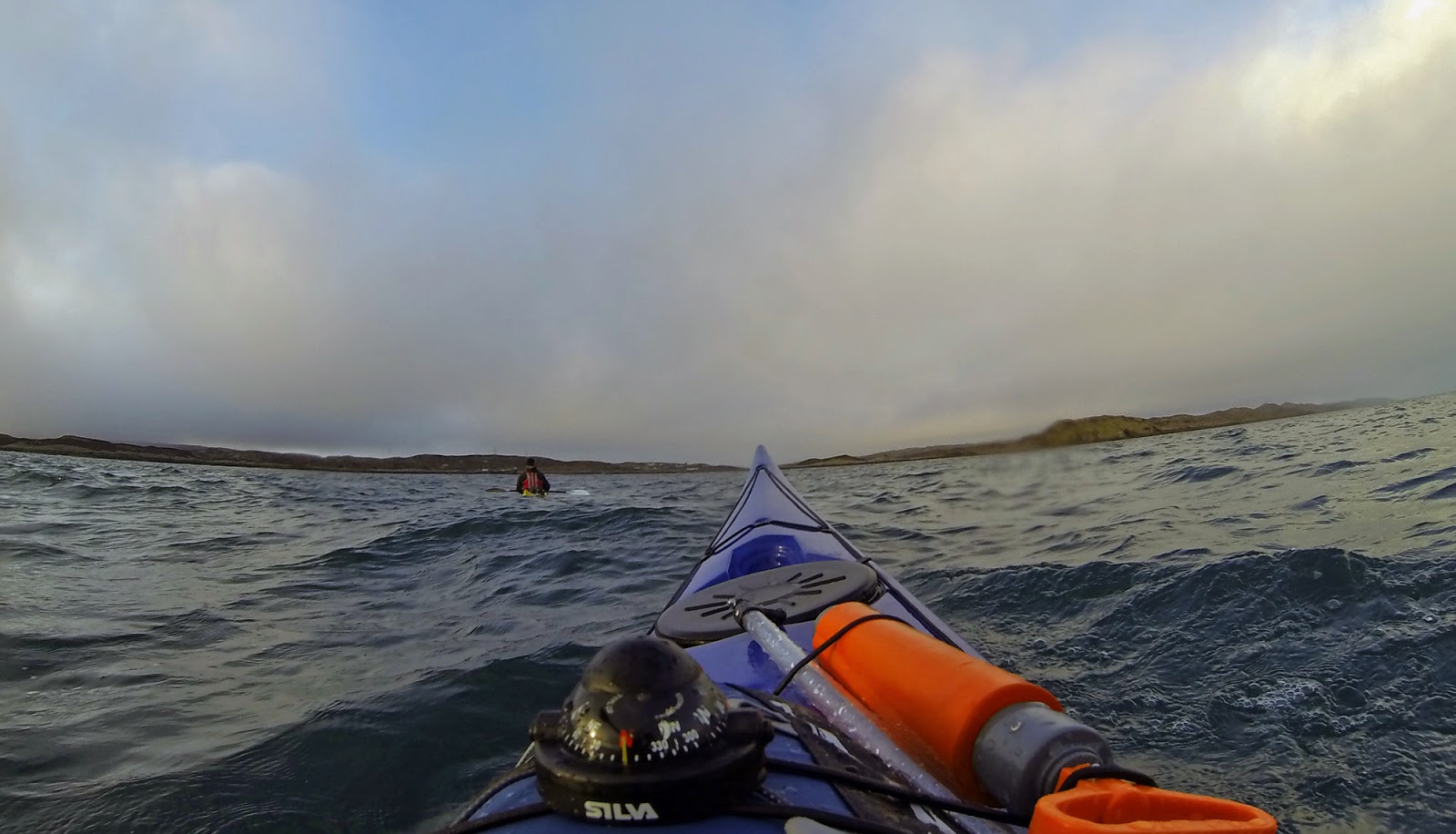 The next day we packed our kayaks for the final time and carried them down to the ferry port for our three hour journey back to Oban on the Caledonian MacBrayne ferry. Sitting in the observation lounge of the MV Lord of the Isles we reflected on what had been a wonderful opportunistic kayaking trip. Although we had not achieved what we had hoped to, we had thoroughly enjoyed every moment. It had been wonderful to kayak and camp in the midst of winter and to enjoy the incredible landscape devoid of others. 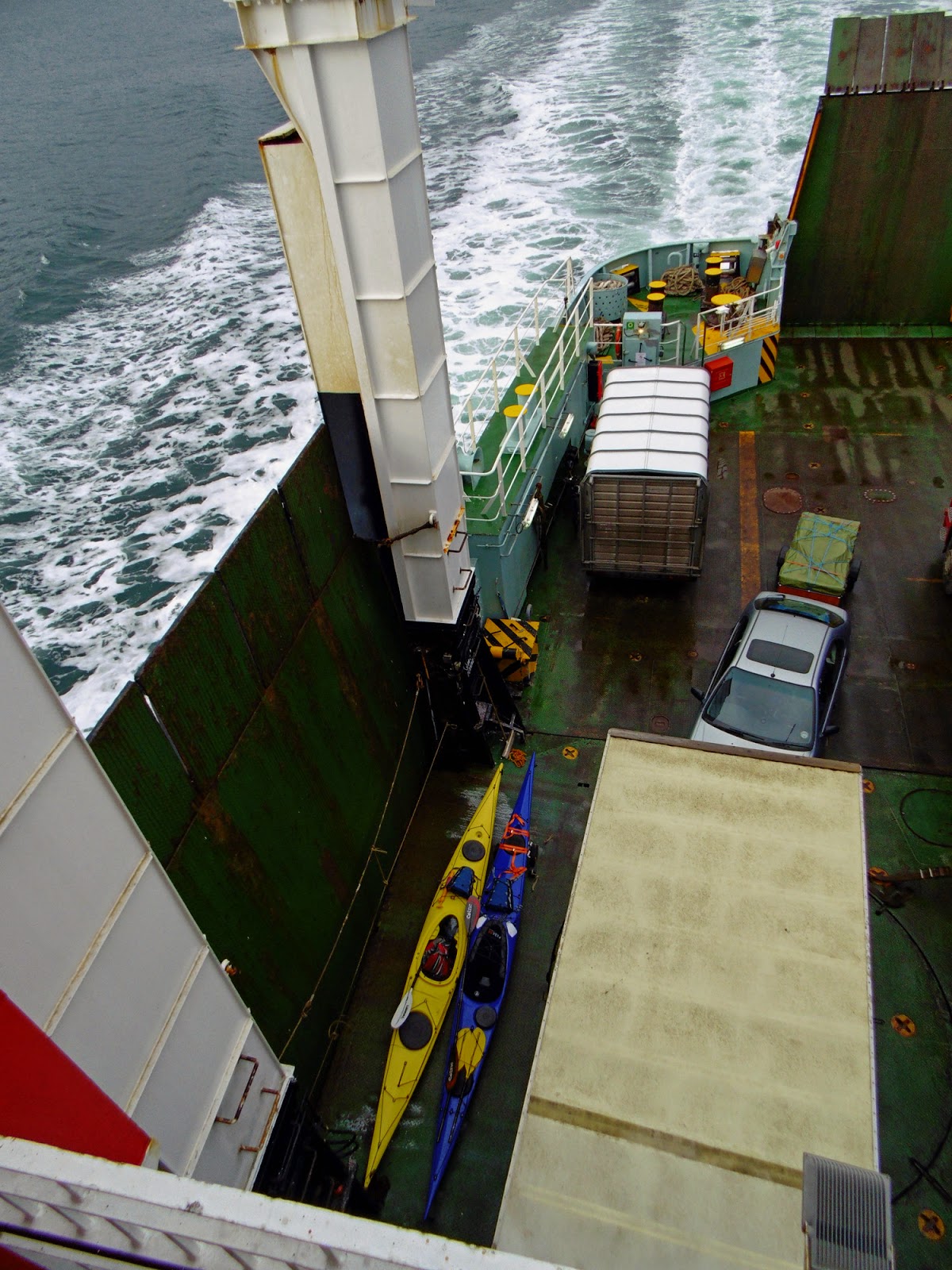 Thank you for taking the time to read my blog and for your comment. I moderate all comments and will make yours public as soon as I have done so.

I'm proud to be raising funds for the R.N.L.I.

Without Julian's and Rosy's support from Sea Kayaking Scotland, I'm not sure if this trip will have been possible.

I am proud to be sponsored by YB Tracking 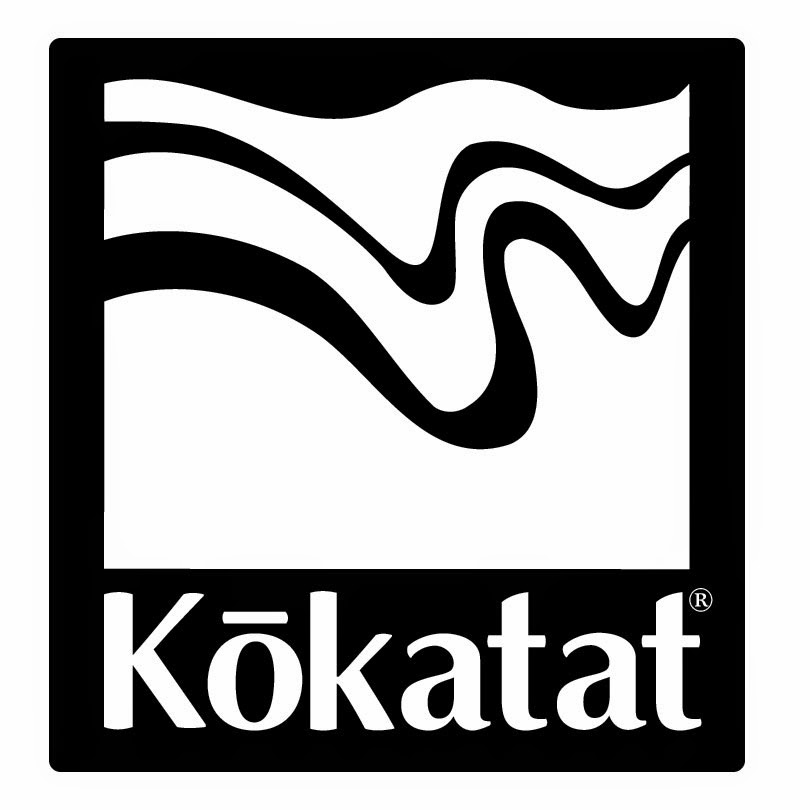 I'm proud to be sponsored by Kokatat Sea Kayak Clothing

I am proud to have been sponsored & given invaluable support by Sea Kayak Oban.

I have received invaluable support from Leonie in the lead up to my journey.

Paddling Into The Corryvreckan 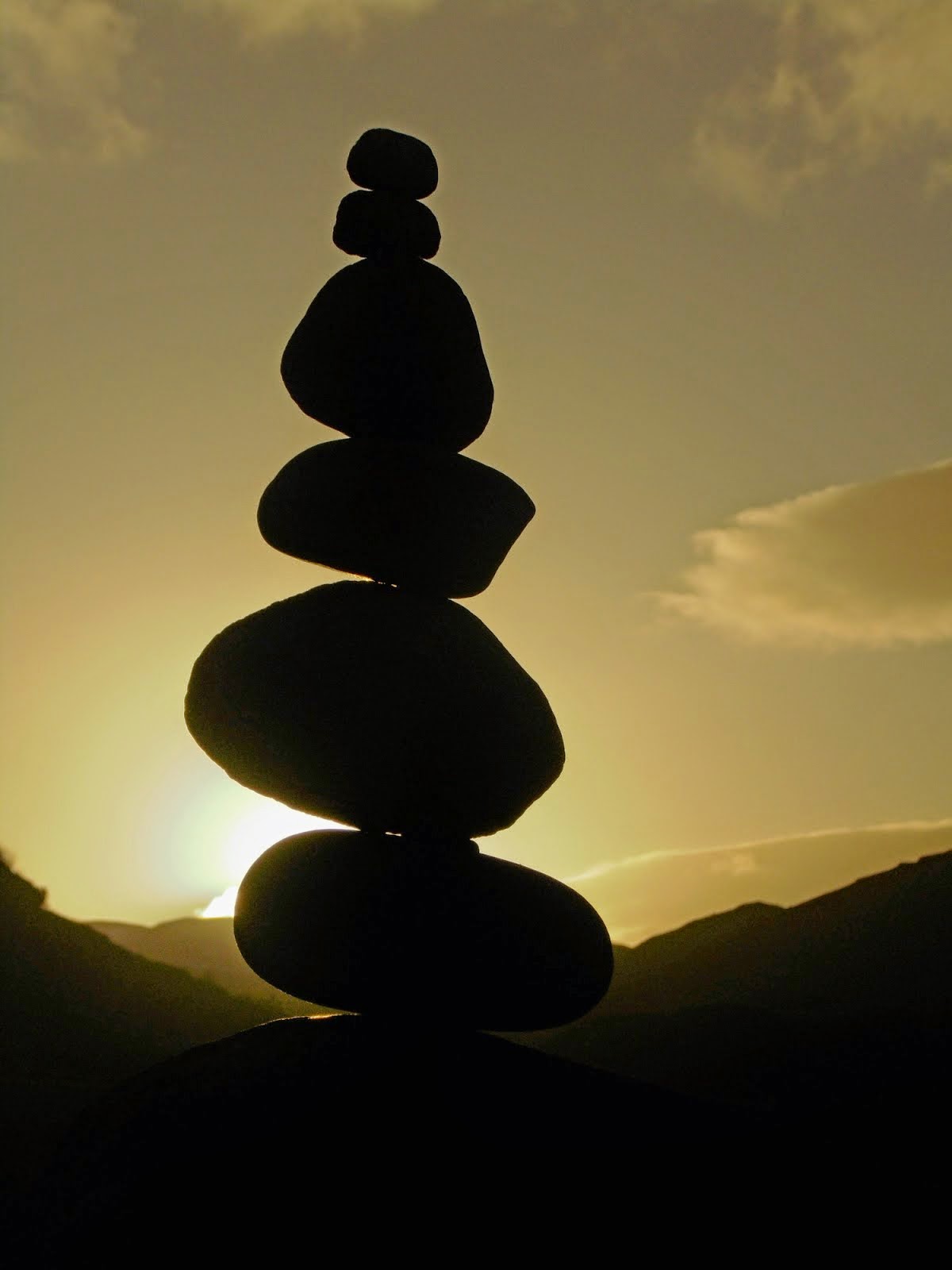 The Point of Ardnamurchan 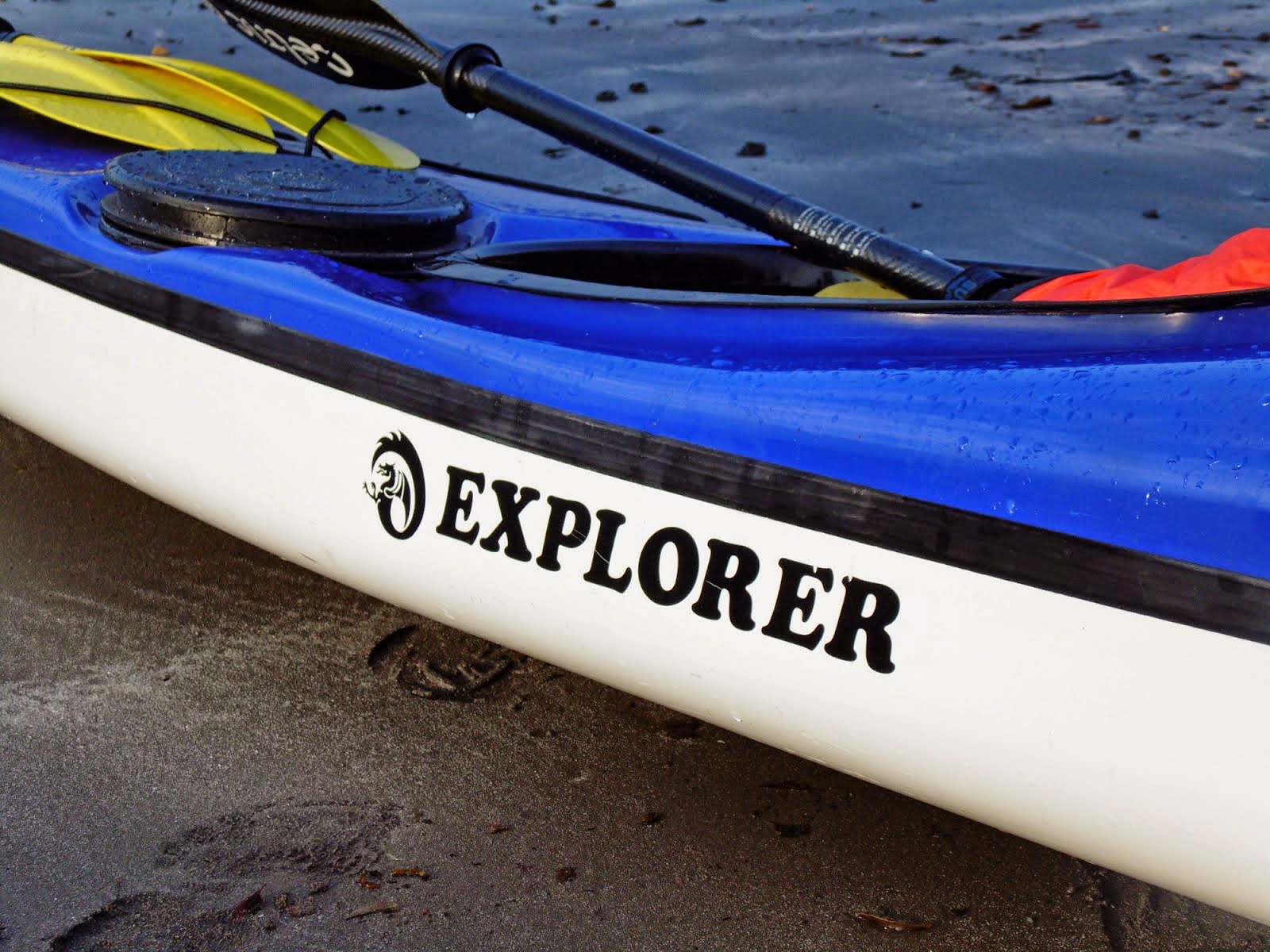 Kayaking in the Outer Hebrides 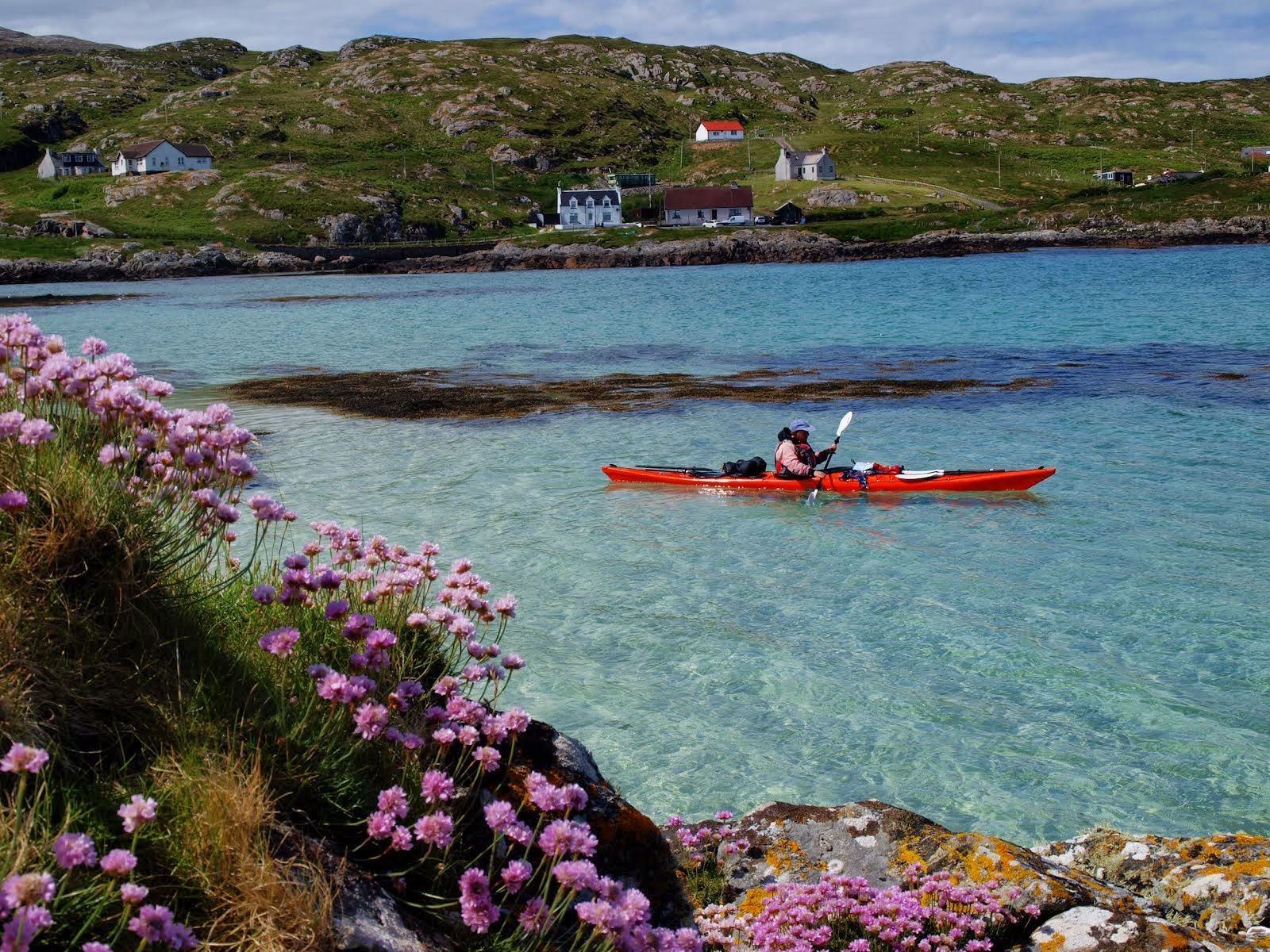